As I dive into this new world of baking, I am often surprised and delighted by the discovery of new ingredients, as well as learning more about ones that I thought I knew everything about. I’ll keep adding terms as I go along.

Tortes are commonly baked in a springform pan. A torte may be made with bizcochuelo base or with little to no flour, but instead with ground nuts or breadcrumbs, as well as sugar, eggs, and flavorings. It can be covered with meringue and almonds.

The most well-known of the typical tortes include the Austrian Sachertorte and Linzertorte, the German Schwarzwälder Kirschtorte, and the many-layered Hungarian Dobos torte. But other well-known European confections are also tortes, such as the French Gâteau St. Honoré. 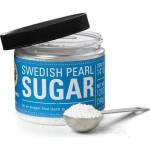 Granulated pure white sugar that has been processed into small, round grains. They will retain their appearance and will not melt under oven temperatures. Use it to decorate breads, cookies, cakes, etc. 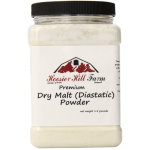 Diastatic malt powder is the “secret ingredient” savvy bread bakers use to promote a strong rise, great texture, and lovely brown crust. Especially useful when flour does not have barley malt added, as is true for most whole wheat flour and many organic flours.

Diastatic Malt is made by sprouting a grain like wheat or barley, stopping the growing process after a few days. The sprouted grain is then carefully dried, the small roots rubbed off and the cleaned seeds ground (milled) into a powder. The resulting powder is then packaged for sale. The malt can also be converted to a syrup. Diastatic Malt contains a collection of enzymes that help the yeast to grow by breaking down starch into sugar. Since the yeast has more available sugar to feed on, it can grow faster and better, which enhances the rise and volume of the loaf.

Non-Diastatic Malt is a substitute for sugar and does not contain the enzymes to enhance the breakdown of starch into sugar. This malt is used as a source of sugar, so in a sense is it a substitute for the starch-into-sugar-converting ability of the diastatic malt. It helps the rise of the dough, but only in so far as it is a sugar. In syrup form it adds a slight tan color to the dough. Of course, being a sugar, using too much of it may reduce the rise or adversely affect the taste of the bread or both. 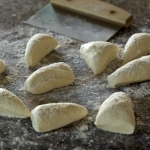 A French term that refers to a dough that is made before the bulk of the main bread dough is put together and allowed to mature or ‘ferment‘.

By preparing a portion ahead of time, it can be allowed to ferment overnight (or however long) in a cool space (slowing yeast activity) where it develops a lot of great flavor that would not be available in a shorter rest time. The dough is then added to the rest of the bread’s ingredients and presto, your “new” dough gets a tremendous flavor boost.

In a bakery setting, a large amount of this dough would be made regularly and a small portion of it would go into, say, baguettes, another portion into kaisers, etc. This is why the pâte is very basic – it would be used throughout the day to make whatever bread was on the menu.